Climate, Material, and Construction Methods: Mongolian Cities and Their Architecture 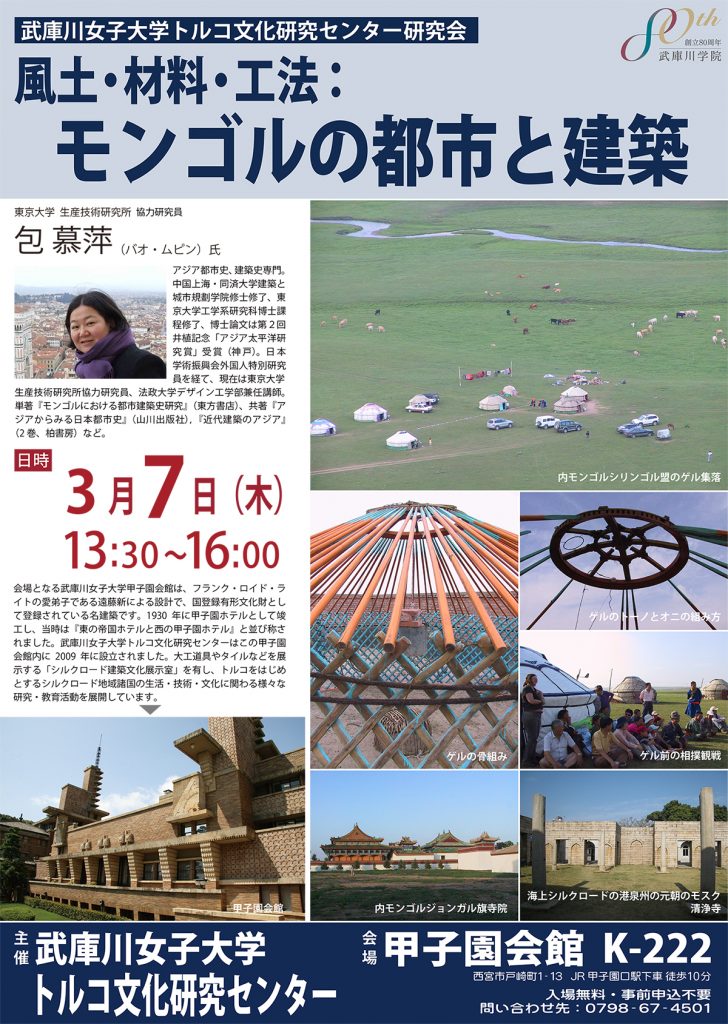 The 1st Seminar of the Institute of Turkish Culture Studies of the 2018 academic year was held at the Kōshien Kaikan on Thursday, March 7th, 2019. Muping Bao, PhD, Cooperative Researcher, Institute of Industrial Science, The University of Tokyo, was invited. She gave a lecture titled, “Climate, Material, and Construction Methods: Mongolian Cities and Their Architecture.”

Dr. Bao gave lectures at two of our seminars this academic year. This was the first of the two, in which she explicated the spatial arrangements within the cities, Buddhist temples, and traditional dwellings called ger of Mongolia. In the first half of the lecture, Dr. Bao spoke about the style of dwellings and urban formation adapted to the nomadic lifestyles of Mongolian people. Dr. Bao also gave a detailed account of the methods and material used to build ger dwellings. In the second half of the lecture, Dr. Bao spoke about Mongolian Buddhist architecture of the sixteenth century and onward through a comparison with Japan.

The audience asked a number of questions during the time allocated following the lecture. Japan and Mongolia, two of the countries in Asia, have many similarities in terms of architecture and religion. Discussions continued and with the second lectured scheduled for the following week on Wednesday, March 13th, we closed this interaction on a lively note.